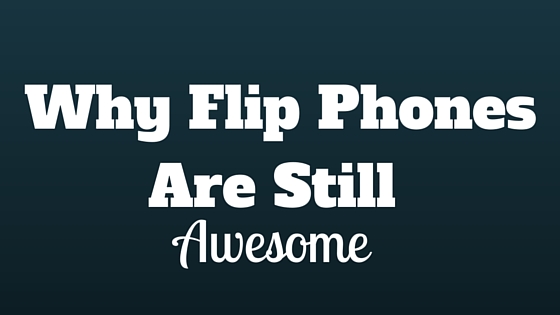 1.  Celebrities and Politicians are Using Them

Purchasing a smart phone of any kind isn’t exactly an inexpensive decision. U.S. News and World Report explains that the average smart phone user is spending far more than they realize. When you combine app purchases, data usage, memory, protection, and repairs, along with the actual phone cost and monthly phone bill, the price can get high in a hurry. Sticking with a flip phone cuts these costs drastically.

3.  They’ll Help You Break Your Addiction

Most smart phone users would not say that they are addicted to their phone. Yet, it is easy to become dependent on a device that you check continuously throughout the day. A teenager, Janey Litvin, recently interviewed with TODAY about the experience of giving up her iPhone for a flip phone. Litvin said, “Although I wouldn’t have admitted it, I was totally addicted to my iPhone”. Using a flip phone could certainly break any smart phone addictions.

If you have ever dropped your smart phone and watched it shatter, then you have come as close to a simulated heart attack as possible. Let’s face it, even the best smart phones don’t have durability in their favor. Yet, flip phones are durable in so many ways (add one of these flip phone cases to make it even more durable). According to the Reviewgist list of the best rugged cell phones in 2016, flip phones are still at the top of the list for durability.

It is a little tempting to check work emails on vacation, especially if you’ve got a fire-breather boss down your neck. Similarly, work texts are bound to come with “important” questions that just need to be answered while you’re fishing on the beach. Flip phones take away some of that reachability, so you can have better, more relaxing vacations.

Do flip phones batteries ever die? Ok, yes, they do, but not at the speed of smart phone batteries. If you get through the entire day without recharging your smart phone, then you are winning. Yet, most flip phones can go DAYS without being charged. DAYS. Also, replacing the battery in your flip phone is a breeze. If you’re in need of a flip phone battery, Ebay claims to be selling flip phones and batteries like never before.

8.  Security is Not a Concern

In today’s day and age, you can never protect yourself too heavily against cyber threats. Hackers are everywhere, constantly after our passwords, credit cards, and private information. Since the rise of Internet usage and banking on mobile devices has led to greater security threats, ditch all that for a flip phone. No one is going to be hacking into that bad boy.

“Oh, sorry, I didn’t mean to call you…” We’ve all been there. Butt dialing always happens at the absolute worse times. With features like Siri, it seems easier than ever to accidentally call or text from your smart phone. Yet, flip phones would never betray you like that. They won’t butt dial, they promise.

10.  They are Small and Compact

Smart phones are getting bigger and bigger these days. Is that really necessary? If you’re looking for compactness then flip phones are the perfect choice. They can fit in pretty much any pocket and you don’t have to build on an extra bedroom to store your phone.

11. They Can Give You Smart Phone Features

If you crave the compact convenience of a flip phone, with up to date smart phone features, you could be in luck. According to MIT Technology Review, cutting edge, all glass smart phones could soon come in flip phone form. A German glassmaker is mass-manufacturing a form of flexible glass, which resembles plastic in many ways. This could make it possible to have an iPhone-like device, which would be foldable like a flip phone

12. You’re Just Cooler When You Have One

According to the Hustle, you risk being called a Hipster when using a flip phone. Aren’t hipsters all the rage these days? You and your flip phone are cool hipsters and you didn’t even know it! Allison Davis with NY Mag ditched her smart phone for a week in lieu of a flip phone as a sort of social experiment and she was cooler than ever in her social circles. “I’m not only flip-phone-level cool but flip-phone-level kind and flip-phone-level mature”, says Allison. Many Millennial flip phone users are finding that going against the crowd makes them more interesting in social situations. The lesson here is this: We can all be cool with flip phones.

Now, based on these reason, I am sure you are convinced that flip phones are even more awesome than you thought. Of course, the greatest reason of all to use your flip phones is one of these flip phone cases.

While the smart phone industry is rightfully powering forward, we can all take a trip back to the simpler, flip phone days.